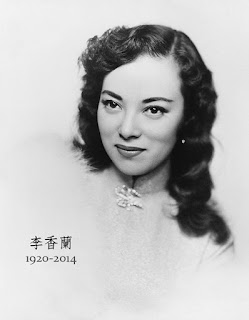 They say "life writes the best stories". From her humble beginnings in a coal-mining area of Manchuria, to super-stardom across all of Asia, to imminent execution by firing-squad, to re-building her career in post-WW2 destroyed Japan, to the heights of Hollywood and bright lights of New York's Broadway, to yet another career as a world-travelling journalist, author, and TV personality, followed by eighteen years serving in the Diet (Upper House of Japan's Parliament), and then years working on behalf of the Asian Women's Fund, through her final years bravely speaking truth to power: such a life-story is truly one of the best you will ever find! 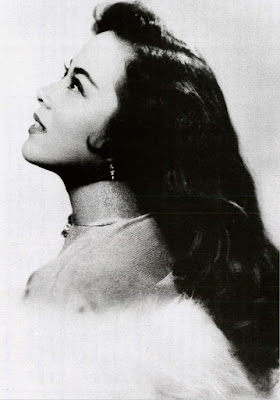 Yamaguchi set gold-standards for perseverance, courage, honesty, beauty (extraordinary and ageless), linguistic ability, unforgettable singing, opposition to war, and a marvelous energy for the work of life. Her highest aspiration was to create more peace and understanding between Japan and China and her lifetime embodied that ideal.


click on the headings above to show biographic details between the years shown; to listen to a nice selection of her songs while reading, click here.

Below is a list of updates, etc, beginning with most recent:

The Mystery page is the surprising conclusion to years of research. You might be surprised to learn that Yoshiko was a subject, and not a citizen of Japan (in the eyes of the Japanese government in 1952, that is). 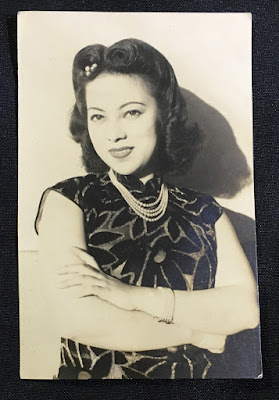 30. Seventeen never-seen-before snapshots of Yamaguchi taken during the filming of her "China Nights" movie were recently found.
29. Isabel Sun Chao (author of "Remembering Shanghai") has fond memories of Li Xianglan on this page.

28. The Asahi Shimbun (in July 2019) published a beautiful website featuring Ri Koran discussing her past life in China. [Japan only knows her now as Ri Koran, which is the Japanese pronunciation of 李香蘭 Li Xianglan.]

27. In March 2019 Kenko Kawasaki (a Japanese academic) published "Another Persona", a book which seeks to cast new (and unflattering) light on Li Xianglan's life.

26. A marvelous 360 degree panorama painting of 1930s Shenyang has come to Los Angeles: click this link for information on how to view this work of artistry.

25. Below is a photo from an historic 1998 Japan TV 1hr movie which shows Yoshiko re-visiting the touchstones of her past life in China. Here she is standing at the edge of the great open-pit coal-mine in Fushun, looking at the chasm of history itself. Link to movie. 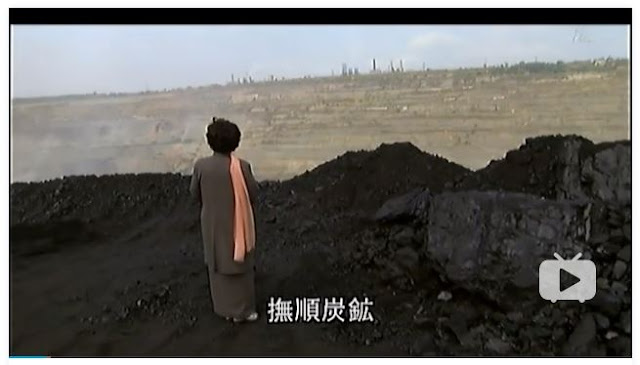 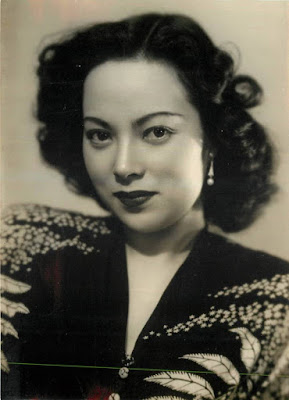 24. Has China decided to 'rehabilitate' the legacy of Li Xiang Lan?
The Communist Party of China and Ministry of Defense of the People's Republic of China websites both published her life story in five parts.

The China International Women's Film Festival in June 2016 at Shenyang Railway Station prominently featured a documentary film on her life by the Taiwanese film-director Chen Meijuin. Here's a link to the film's website.

A Shanghai website published the story about Li Xianglan's Taiwanese chauffeur when she was in Shenyang in this article.

23. Recently found: about 160 American newspaper-clippings between 1950 - 1960, posted on a new page for easy reading. Yoshiko was one of the most quotable starlets in America and gossip columnists had a field day with her vivacious and witty style. Some of them even got her charming accent right, letting us know she was "very hoppy" to be in the United States.

22. Author Edward Moreno has penned a 5 part series on Yoshiko (on the DiscoverNikkei.org website) full of interesting historical information: click here for the first article in the series. 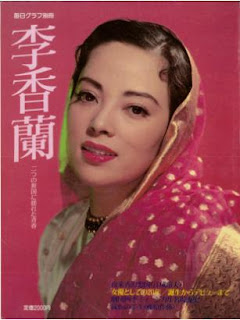 21. Mainichi Magazine. This 180 page Japanese collector's edition of June 30, 1991 (cover page on right) contains many pictures of Yoshiko that have never been seen on the internet; all in high-resolution. In fact, her most risque photo (taken after she turned 50!) is in this issue (it was taken by famed nude photographer Kishin Shinoyama). Enjoy! 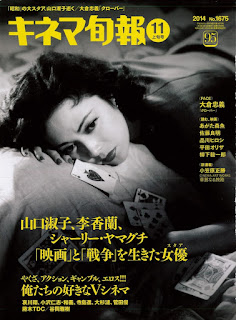 20. Postscript. I will be adding pertinent items from time to time. Such as this Kinema Junpo November 2014 article reviewing Yoshiko's career in film: (cover page on right):

19. A Hong Kong newspaper interview with Yoshiko made in 1991, in which she allegedly says "one of her great-grandmothers was said to have been French". You can read further details about this interview at this point in the biography. 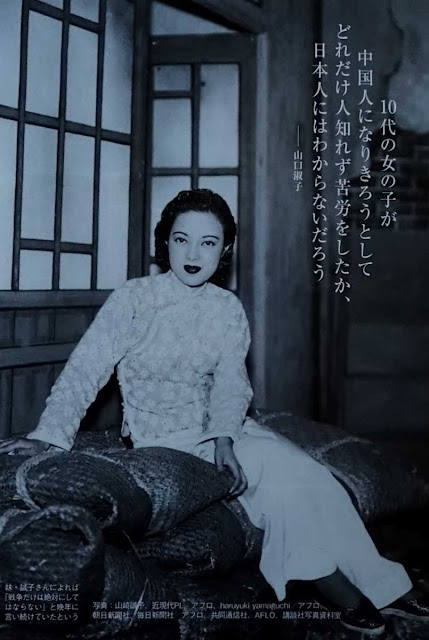 18. Added a list of 127 Yamaguchi songs on the Songs page complete with their YouTube links courtesy of reader Peter Z. Mitchell PhD. Peter has passed away in March 2018.

17. Received the sad news that the great actress Setsuko Hara (1920 - 2015) has passed away. You can see a glimpse of her in the below video at Tokyo Haneda airport greeting the arrival of Yoshiko Yamaguchi:

16. This short 1954 newsreel highlight shows Yoshiko arriving in Tokyo and also on the set of House of Bamboo in Hollywood. Unfortunately it does not have sound. How playful and uninhibited she was: a proper Japanese girl would never allow herself to be picked up in public - and by an American ! "Hey, put me down, put me down!"

15. Since the basic outline is finished, I am rereading the memoir and filling in/adding information as I go; also offering summary thoughts on each phase of her life. (see bottom of pages).

14. 1950 Live Performance page added. These are some rare and beautiful songs recorded in California; they feature Yamaguchi singing and speaking. They are in the public domain for now, but who knows for how long?

13. Intelligence file page added - has samples of the type of data collected on Yamaguchi by military intelligence. A fascinating look into the shadowy intelligence world circa 1950. Many old newspaper articles from this file have been added to 1952-1958 page; in addition to many other files included on other pages.

12. we have a new source of information: yanagi470 a Japanese blogger who has many unusual photos and stories about Ri Koran (use the Google translate feature in Chrome to get instant translation) 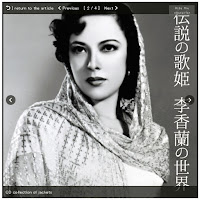 10. 2015: a new CD of Yamaguchi favorites was issued by Columbia/Japan (copy shown on right) - click on The Songs page for details: 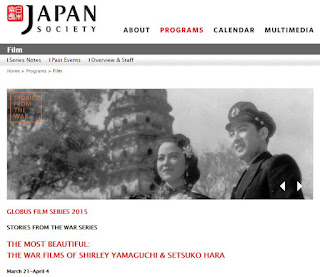 8. in April 2015 the Japan Society of NYC presented a film series called: THE MOST BEAUTIFUL: THE WAR FILMS OF YOSHIKO YAMAGUCHI & SETSUKO HARA.
included are five of Yamaguchi's films: click here for info on this film series
Two Yamaguchi scholars present their differing views here.

5. we have a new source of information: Andrew Knoski - click here to see the Japanese website featuring comprehensive information which Knoski has posted on Yamaguchi. (use the Google translation feature in Chrome to get instant translation)

3. added the new page 1937 - 1938, based on a close reading of the new translation of Yamaguchi's memoir by UH Press (see  Books link for more details on this book).

1. added close to fifty pictures to the Knoski Photos page.

to be continued:
Posted by John M. 12 comments:
Email ThisBlogThis!Share to TwitterShare to FacebookShare to Pinterest
Home
Subscribe to: Posts (Atom)